▷Ways An Earthquake Can Damage Your Plumbing Denver

How An Earthquake Can Damage Your Plumbing In Denver? 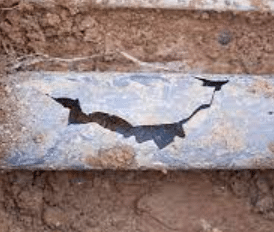 Plumbing systems are not designed to withstand the intense shaking and movement associated with an earthquake. Plumbing problems are one of the most common types of damage after an earthquake. The following are some ways how an earthquake can damage your plumbing:

Severe shaking can loosen pipes, causing them to break or leak. These loose pipes can also damage other plumbing fixtures in your home. Pipe breakage is a common problem during and after earthquakes. When pipes break, water can gush out, flooding your home or causing extensive damage.

Water heaters can be damaged in several ways during an earthquake. The tank can rupture, the heating elements can break, or the plumbing can be damaged. When a water heater breaks, it can release hot water and steam, which can cause serious burns or other injuries.

Sewer lines are often damaged during earthquakes. They can crack, rupture, or collapse. This can cause sewage to back up into your home or to flow out into the street. It can also damage nearby homes and businesses.

Faucets can be broken by the shaking of an earthquake. They can also be damaged by falling objects such as bookshelves or cabinets. When a faucet breaks, it can release large amounts of water quickly, causing flooding and other damage. Faucets can leak when the seals that hold them in place are damaged by the earthquake. This can lead to water damage in your home and added expense as you have to repair or replace the faucet.

Earthquakes can cause drains to become clogged with rubble, mud, or other debris. This can cause water to back up into your home or to overflow onto the street. It can also damage nearby homes and businesses.

Toilets can be broken by the shaking of an earthquake or by falling objects such as bookshelves or cabinets. When a toilet is broken, it can release raw sewage into your home. This can create a health hazard and require extensive cleanup efforts.

Sewer lines can be damaged in earthquakes, leading to sewage spills and hazardous conditions.

Water service can be disrupted during and after earthquakes, leaving you without running water or even potentially causing a flood if the water main is broken.

The shaking and movement associated with an earthquake can create electrical hazards, such as shorting out wires or sparking appliances. Electrical fires are a common hazard after earthquakes.

Gas lines can be ruptured during earthquakes, leading to gas leaks and potential explosions. Gas leaks are a serious hazard after an earthquake. If a gas line is ruptured, it could lead to a dangerous explosion.

The foundation of your home can be damaged in an earthquake, which can lead to structural problems and even the collapse of your home.

The shaking and movement associated with an earthquake can damage your home’s structure, leading to roof collapses or other serious problems.

An earthquake can cause a lot of damage to your plumbing system. Pipes can break, fixtures can be damaged, and drains can become clogged. There are many potential hazards associated with a broken plumbing system, including flooding, raw sewage spills, gas leaks, and electrical fires. For more information, contact Drain Pros Plumbing Denver at (720) 703-9927.